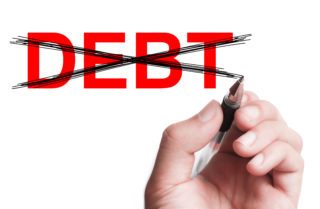 The amount of debt written off in an IVA is not fixed. It depends on how much you can afford to pay into the Arrangement.

How much Debt is Writen Off in an IVA?

There is no fixed amount of debt that can be written off if in an IVA. You may have read or heard that the solution will mean you write off 75% or more. However this is not always the case.

Once the Arrangement starts you usually make monthly payments towards your debts based on your disposable income. The payments will normally last for 5-6 years. At the end of this time any debt that remains unpaid is written off.

The debt written off in an IVA is not fixed. It depends on how much you pay into the Arrangement. Two people with the same amount of debt may write off different amounts.

Calculate the Amount of Debt you could Write Off

To get an idea of how much debt you will write off in your IVA you first need to estimate how much you will pay into it. To do this you need to multiply your monthly payment with the expected length of the Arrangement.

Most monthly payment IVAs last for 5-6 years. If you believe you will be paying for 5 years then you have to multiply your mothly payment by 60 months. If it is 6 years then multiply the amount by 72 months.

Then you need to take away the total amount you will pay from the total debt included in the agreement. The amount left is what you can expect will be written off. You can then calculate this as a percentage of the total debt owed.

Can the Percentage of Debt Written Off in an IVA ever Change?

Once it has started the amount of debt written off by an IVA is not fixed. This is because it is possible for the amount you pay into the Arrangement to change.

If your income improves during your IVA the result may be that your disposable income will go up. As a result you might have to start paying more into the agreement. If this happens then the amount of debt you write off will reduce.

In the same way if your circumstances become worse you may be able to reduce your payments. In this situation the number of payments you make may be extended but you could end up paying less into the IVA overall. As a result the percentage of debt written off will increase.

If your income increases or you get a windfall during your IVA the amount you pay into it will increase. As a result the amount of debt written off will fall.

Will you ever have to pay all of your debt in an IVA?

It is possible that your fortunes could improve to such an extent that you are able to repay all of the original debt you owed during your IVA. This might happen if you receive a large windfall such as an inheritance or lottery win.

If this were to happen the terms of your agreement will state that the money received has to be paid to your IVA company. They will then use the funds to repay 100% of your original debt (less any payments you have already made). They can also pay their fees and interest on the debt at 8% pa from the start date.

After this the Arrangement will come to an end. However because all of your original debt has been paid in full you will have written off nothing.